The 5 Deadliest Enemies of Leadership Success

Leaders can prevent a career disaster by avoiding the enemies that cause it. First, he or she has to pay attention to the signs and then reform. We have all seen too many high-profile leaders in a mix of venues fall from grace in a subsequent media circus.

In similar cases managers throughout an organization meet defeat because of their indiscretions. However, most go relatively unnoticed except by their destructive impact on the employees or companies that are wronged. What’s the matter with these people? Where is their character? What happened to their integrity? Don’t they know the signs of their inevitable downfall?

Here are the five greatest enemies of a leader. Far too many fall prey to these potentially poisonous pills that subtly weaken and defeat even the strongest of managers. Each of  these enemies sucks the life out of workplace harmony. They inevitably leave a trail of turmoil, workplace distrust, employee disengagement and an overall negative result.

Ron Johnson spectacularly failed because he succeeded in the past at Apple. Therefore, he thought he knew what JC Penney’s customers wanted and needed. He didn’t ask them or test his theories. His arrogance overrode his past genius and nearly bankrupted the company.

A manager in a manufacturing company consistently shut down employees who brought up problems or new ideas. He believed that HE had the answers, not them. It was his way or the highway. He said, “I am all for employee involvement as long as they come up with what I want.” When results were screwed up or not up to his standards, he blamed and screamed at his team. Employee morale and performance hit rock bottom.

Ken Lay and Jeff Skilling of Enron are among the top ten crooked CEOs. Through deceit and shady business practices they rapidly built the seventh largest company in the US, over $100B in size. Eventually their house of cards collapsed almost overnight. Thousands of people, innocent of the necrotic scheming, lost their jobs and life savings because of their lack of integrity.

A sales executive in a chemical sales company habitually lied and made empty commitments to customers to get the business. The company, unaware of his antics for a while, lauded his expertise. When the other departments failed to follow through on these unknown promises, this leader washed his hands of it. Then he complained about the lack of company teamwork. The corporate office was in turmoil with everyone pointing fingers.

After the Watergate fiasco, for US President Richard Nixon’s alias was Tricky Dick. Throughout his political career he resorted to dirty tricks to get and keep power. It all caught up with him through the scandal and that is how is often remembered..

One company President called his employees ‘children’. He boasted that you needed to pat them on the back and at other times, the behind. Whenever anyone confronted him or gave contrary news, he pounced on them. He held grudges forever. In most cases, he reassigned them to lesser duties or had them fired to demonstrate his control.  Abraham Lincoln said,  “Nearly all men can stand adversity, but if you want to test a man’s character, give him power.”

Former stockbroker, Bernie Madoff , epitomizes corporate or leadership greed. He had no sense of ethics as he swindled people out of millions of dollars. It apparently continues in prison as he jockeys with journalists for the most money, over who would tell his story.

A retail manager often bragged to everyone about his results. In fact, the company recognized him often for excellent sales achievements. He always received the biggest bonus and wasn’t shy about telling everyone. His results were so much better that a number of people questioned his tactics. This went on for a few years. He was quietly “cooking the books” and lining his pockets. Eventually he was exposed and prosecuted.

In a study CEOs were asked the reason for their rise up the corporate ladder. The number one response was their ability to communicate. Employee engagement surveys often find the lack of communication is the key issue in the company. There is an obvious huge gap in perception between these two groups here.

How to Avoid the 5 Enemies of Leadership

The five leadership enemies above involve serious character flaws. Consider these guidelines as a leadership compass for more acceptable behavior:

Warren Buffet said, “It takes 20 years to build a reputation and five minutes to ruin it. If you think about that, you’ll do things differently.” Mark Twain added, “”Always do right. This will gratify some people and astonish the rest.”

Do you want to create an environment that brings out the best in people and increases employee engagement? See this complimentary article: How to Motivate People and the High Performance Formula.

Want to accelerate your career? Check out my Superstar Leadership book or others in  the Superstar Book Series 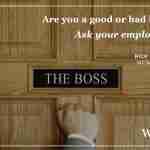 Are You a Bad Boss or a Good Boss?Coaching, Leadership, Leadership Development, management, Rick Conlow 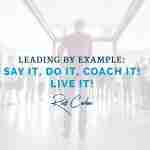