Leadership worldwide is in crisis mode. In all areas of life, leadership distrust has hit rock bottom. Seldom does a day go by without another story in the media about a leader–in government, religion or business–that bites the dust because of an ethical or behavioral failure.

In the business arena leadership failures abound.  Aon Hewitt’s report, 2013 Trends in Global Employee Engagement, shows that 80% of employees in companies aren’t actively engaged. Gallup’s report, The State of the Global Workplace; shows similar results with 87% as unengaged.  In other words, employees aren’t that committed to doing their best for their leader or company. Unengaged employees are less productive and lose companies billions of dollars in lost sales, poor customer service and inferior quality.

The solution seems elusive because not much has improved in recent years, but it is relatively simple. Here are five laws of human interaction that can help leaders change their approach, and at the same time literally transform the attitudes and actions of their teams or constituents.

This is a fundamental problems with many leaders; it’s all about them. Too many are selfish and egotistical.  Recently, AOL’s president demonstrated this when he cut employees’ health benefits because of what he called two “million dollar babies.” He did this while the company enjoyed better profits and his income was $12,000,000 for the year.  This kind of insensitivity happens often in leadership roles, and it destroys employee morale. The best leaders win because they help others win. Their focus is on others’ success, not just on their own personal success.

#2 Treat people with respect and honesty–not as commodities

Employees are the greatest resource of a company. However, they are often treated like Cinderella, the unwanted and abused stepchild. Target Corporation recently had a costly security breach in their credit cards that affected 110 million customers. One estimate predicts this will cost them $680 million dollars. Shortly after this breach, 475 employees were laid off. Did these employees cause the breach? Were they all poor performers? Companies often do layoffs without much concern for employees, to show Wall Street that they are taking action and, in this case, trying to restore the public’s faith in the company.  However, these actions deaden employees loyalty.

What if leaders in the corner office or on the showroom floor showed more genuine courtesy? What if they listened better, or admitted a mistake, or handled conflict constructively?  What if they did more genuine leadership coaching? These kinds of actions produce employee engagement and productivity, as well as trust. Gallup’s employee engagement studies show that employees fully engaged perform 202%  better on performance drivers than other employees.

At one company, the employees confided in the consultant about their leader. They said, “Get him out of the office to see what is happening. All he does is use his reports to send out inflammatory emails all day.” On employee engagement surveys poor communication is often the highest complaint about leaders at all levels. Yet, many CEOs proudly proclaim that the #1 reason for their rise to the top is their ability to communicate. Clearly there is a communication gap! Leaders today need to ask more questions, listen better, hold better and purposeful meetings, and engage their employees more. Leadership engagement such as this creates more employee engagement.

#4 Give your team the praise–get out of the limelight

For too many leaders, work is like the big party and  they are the center of attraction.  Up and down the corporate ladder, supervisors, managers and executives clamor for credit when things go well, and blame employees for the failure. Research by the Jackson ROI Study proclaims that the more genuine recognition you give to employees the greater the impact on the bottom-line. Common sense says that when you appreciate others, they will respond in kind. In the workplace this means employees do a better job. Praised and rewarded behavior is repeated.

Muhammad Ali captured people’s attention because he believed in himself. He said, “I am the greatest!” His ability to communicate and his boxing talents captured the hearts of millions worldwide. Mother Teresa took approach one step further. Her faith was in her calling and in God.  Becoming homeless, hungry, and sick herself, she served the dying and the poorest of the poor. Eventually she build a network of 4,500 sisters in 133 countries.  This leadership principle–leading by example–is an art forgotten by many.

Corporate executives want more technological advances, electronic gadgets, and business intelligence today. High-tech not high touch seems to rule the corporate priority list. Many leaders use the excuse that they are too busy to enter the fray to interact with employees, talk to customers, or work the midnight shift.  Successful leaders do what they ask others to do. Best- selling author and leadership consultant Steven Covey said, “What you do has far greater impact than what you say.”

Leadership is influence and it is either good or bad. There are no grey areas. Leaders today can transform their employee engagement by applying these five basic human relationship skills with the same diligence that they use market analytics, or profit-making ratios. Lao Tzu said, “A leader is best when people barely know he exists, when his work is done, his aim fulfilled, they will say: we did it ourselves.”

By the way, do you want to learn more about how to improve employee engagement? Check out the complimentary eBook: How to Motivate-NO-Inspire People: 10 Keys to Employee Engagement

Or, do you nee help dealing with massive change? Read this: Changing Change Management 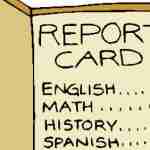 The Manager’s Report Card: How Do YOU or YOUR Boss Rate?Business Success, Coaching, Leadership Development, Personal development, Rick Conlow, Training