However, you can’t lead your team if you aren’t involved or available. Leading from “on high”, through edicts, emails, phone conferences or texts doesn’t cut it today. Never really has. Employees experience way too much of that loftiness and it leads to their disengagement. It’s also hard trying to be something you aren’t. Plus, it isn’t authentic.

The Problem: Trust is Broken

In a quick study of what’s going on in organizations today there are two powerful clues to the first rule of leadership.

Tony Hayward former CEO of BP declared the antithesis of the first rule of Leadership. In the midst of the tragic Deepwater Horizon oil spill of 2010, the worst spill in US history, while dealing with it Hayward said, “…I would like my life back.” He also commented to BP executives, “What did we do to deserve this?!” He seemed more concerned about himself and the company, like so many other executives and managers, than he was about the employees who died, the environmental disaster and economic blow endured by the employees and their communities.

Employees are wary of leaders that:

The First Rule of Leadership Defined

The above traits fan the flames of employee fears, dissatisfaction and discontentment which decreases employee performances across the board. The first rule of leadership for any supervisor, manager and executive is that “It isn’t about you.” Rare are the leaders who make the time to understand, listen, empathize, and act on the needs or issues of their teams and other constituents. These leaders know that when their team wins, they win. So they empower the team, clear away obstacles, encourage and train them, and support them in any positive way they can. They create trust.

Most importantly, Nelson Mandela said, “A good leader can engage in a debate frankly and thoroughly, knowing that at the end he and the other side must be closer, and thus emerge stronger. You don’t have that idea when you are arrogant, superficial, and uninformed.” And that’s the big problem isn’t it?

By the way, do you want to elevate your performance as a leader? If so, check out this complimentary eBook: Coaching for Results.

Finally, do you want a proven game-plan for your management career success? If so, check out Rick’s Superstar Leadership book. 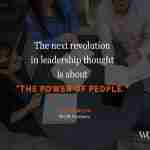