Increase Your Learning; Accelerate Your Career

Do you know everything you need to know about what it takes to succeed in your career? “It’s what you learn after you know it all that counts,” says former President Harry S.Truman. Do you want a breakthrough in your personal success this year? Why not seek a positive change? Why not help your employees succeed more? Their success determines your success as a leader.

An interesting fact shows that only 13% of people read a book a month. Nearly half of all people read fewer than two books a year. Accenture found that only 21% of employees attended a company sponsored training program in the last five years. In other words too many people are “stuck” in the status quo. In this rapidly changing world, the lack of a commitment to on-going learning, self-directed or company driven, is a liability. Those leaders who accelerate their learning will have an edge.

I am reminded of a story. I was at the YMCA getting dressed after a workout. Two guys walked in and started talking while preparing to shower. One guy said to the other, “I can’t take it any more. I quit on my New Year’s resolutions.” It was January 19th.

Most leaders fail with their goals because they lack team development, and systematic process for attainment. It’s one thing to set a goal; it’s another to consistently act on it. Here is a complimentary resource to get you started. Use this 68 question Superstar Leadership Assessment to identify your strengths and areas for improvement as a leader. Benchmark yourself with the best. Remember, if you want your team to be better you have to be a better leader.

Famed football coach George Allen often took defeated and older teams, and made them champions. He was asked, how he did it. He said, “We did one more.” In others words, they studied, worked out and planned a little extra. His teams always did more preparation than the competition. So here is one more for you.

Check out our four unique Breakthrough Coaching and Training Plans to Increase Your Leadership Effectiveness.

Or, see our GoalPower Ebook for a proven road-map to achieve your goals. 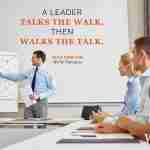