Positive attitudes do wonders for anyone. Do you have too many troubles or problems? Are you disappointed or frustrated about your current situation? Do you feel you can achieve more in life? Where is your success? In this motivational video clip, you will learn 3 powerful positive attitudes. Each a involves a story and approach to help unleash your potential.

A Positive Attitude Means You Believe in Yourself

One word separates the achievers from the non-achievers, and that is belief. Unfortunately, you can attend all the seminars, read every book, write down every goal, and it will all be in vain unless you believe. Only when you genuinely believe will you achieve your goals in life. Believing requires a positive attitude.

Someone once said there’s magic in believing. But believing is powerful, not magical. The New Testament mentions the words “faith” and “believe” 485 times. The two words essentially mean the same thing. So, if God places such tremendous emphasis on belief, shouldn’t we? Mountains can be moved if you have belief. And daily problems become formidable barriers if you lose it.

For example, Dr. Jonas Salk believed he could help cure polio. President Franklin D. Roosevelt believed the only thing we had to fear was fear itself. Martin Luther King Jr. believed in a world of racial equality. President John F. Kennedy believed we could put a man on the moon. Anne Sullivan believed and set an example of faith and determination for us to follow. The Wright Brothers believed that people could fly. Certainly, people who believe have a positive attitude and goal, a faith in something bigger than themselves, as well as a strong belief in the person they are.

Often, people without belief become frustrated. And typically, they lack the power to become all they can be. Believers inspire others with their motivation. Therefore, by believing in yourself, your goals, and your cause, you enjoy the power to live an abundant life.

Most importantly, the attitude you choose, becomes the action you take. Positive thinking is not your ticket. Choosing positive attitudes and acting on them is the secret. Certainly, it takes work and persistence. However, the good news you can overcome your obstacles and problems. You are made in the image of greatness. Consequently, visualize it, verbalize it, and vitalize it. Moreover, watch this positive attitude video for success motivation to get started today.

Also, go here for our RealTime Learning and Training leadership and personal development website. It includes many career defining resources. Micro-learning at your fingertips! 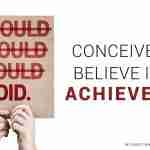 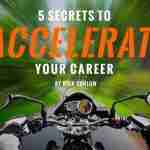